People, it's nearly time to get some kitchen renovation happening around here.

Here's the thing: Dan has a new job and, while we're both thrilled for him because it's a great opportunity for a great company, his time to work on this build just plummeted. Dramatically. To practically no time.

And here's another thing: we can't put off the kitchen renovation because we're sort of locked into the time frames having already ordered the kitchen...

And here's the final thing: our budget allows almost nothing for labour. Dan is our labourer.

So, there you go. An interesting predicament. The kitchen is being installed for us but we need someone to line walls and replace some flooring and install new windows. Dan is going to try and do what he can in the next few weeks and after that, who knows?

I sincerely hope I am not stuck using the back verandah makeshift kitchen for months though.

Anyway, let's not let this little speed bump deter us from important things like looking at inspirational pictures on Pinterest, shall we?

Here's a look at where we're headed, style-wise. This is the closest thing I've found online to what we're doing: the cabinets are very similar to what we've ordered, and we're going with timber bench tops. We'll be doing what we did in the Little House: buying bamboo benchtops from Bunnings and then putting several coats of two pack finish on to harden them up.

This room, as you may notice, has a large pressed tin ceiling, which we also have. I love the colour they've chosen - I'd only really thought to paint ours in white, but it looks great dark here - it really emphasises the detail. 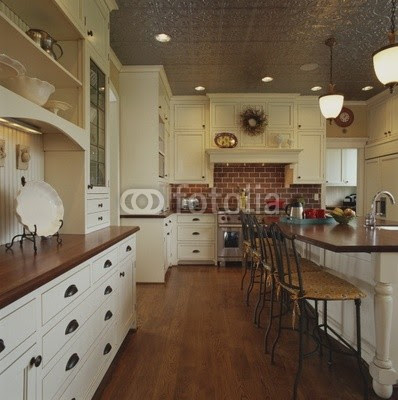 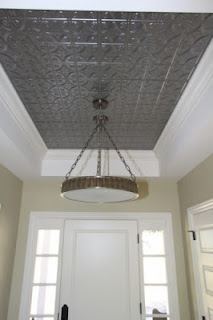 We've ordered a sink, a fluted double butler's sink, not unlike this one: 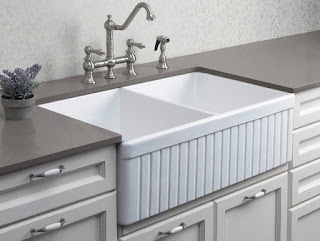 Dan has ordered timber sash windows to put back into the kitchen and bedrooms, replacing the aluminium windows there now. We were going to do the kitchen only (for now), but while he was at the supplier's, he saw four windows in the 'seconds' section for a fraction of the price - apparently they were just a custom order that hadn't been picked up. They're quite tall and narrow, so two will be fitted side by side in the two outside bedrooms.