We got another dog! She's a miniature fox terrier and so far she's been settling in...OK. We found her on Gumtree and she is a year old but has had pretty minimal training as far as we can tell. She can sit on demand but mostly chooses not to. She is also not properly house trained and seems to be completely unphased by our dislike of her using the bathroom as a loo.

She is an outside dog now and I know I've got an uphill battle training her.

We've recently had a system called the Hidden Fence installed. Both dogs now wear collars that administer zaps when they try to go past the perimeter fence of the house block. Maisie, being the canine equivalent of Eeyore, has had two zaps and now refuses to go anywhere near the flags that mark the boundary. She has at least stopped sulking mournfully under the house though and come to terms with the end of her daily sightseeing ventures around the neighbourhood.

Pepper, being more of a determined, gutsy young soul, has worked out if she runs and leaps at the fence, she'll get the shock but she'll also get to the other side. She's still on the lowest setting of the system, as she's still in the training phase. I will have to turn her collar up tonight to try and deter her.

I definitely like the fence system so far. It's awful watching the dogs get the zaps but not as awful as keeping them locked up in a laundry all day because they escape so easily. With livestock all around, many people don't take so kindly to wandering dogs around here.

While I'm on the subject of training, I've been working with Lucinda and a rubber snake to try and teach her wariness. She can now say 'nik' (snake) and knows to give that ever present rubber snake a wide berth. I just hope she doesn't think all 'niks' come with orange and red stripes! 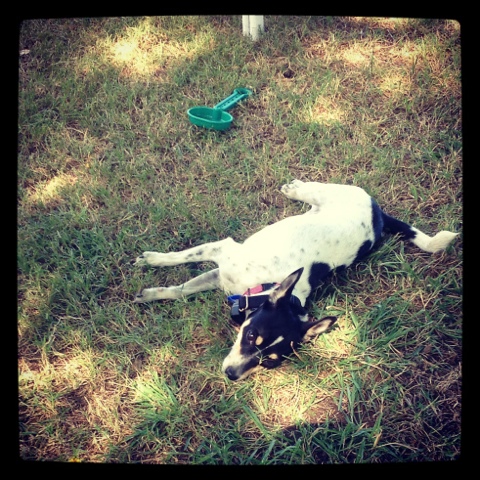