The Evolution of a Kitchen

After weeks of kitchen planning, we've booked a consultation with Freedom Kitchens for another couple of weeks away as part of a big sale they're having.

I want more of a country look in this kitchen, for obvious reasons, and had thought I'd do white again, although with timber benchtops.

But, after flicking through some magazines and pinterest, I realised I was getting a little sick of looking at white kitchens. Plus, we are planning white walls and a white splashback... white on white on white.

I'm feeling over white. I didn't think it was even possible to be over white until recently, but there you go.

I'm now thinking maybe blue cabinetry - a duck egg or pale teal - with a hardwood bench top, not unlike this one: 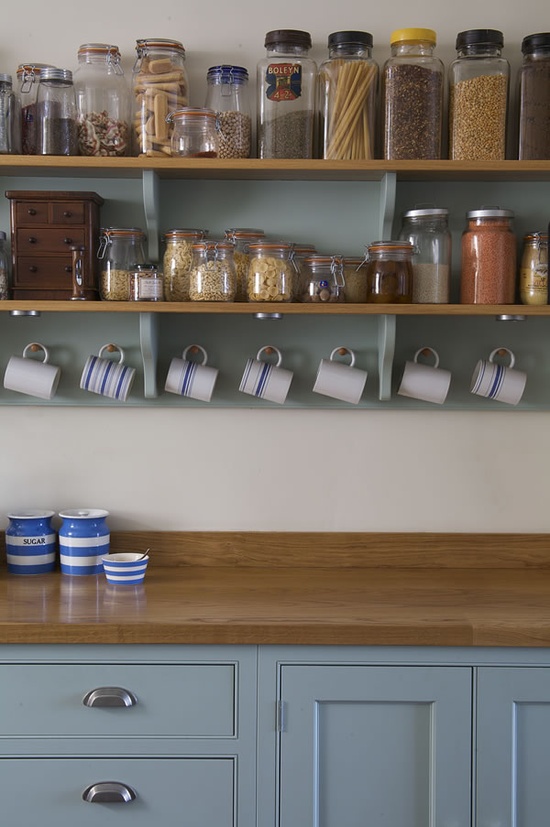 Looking online, it looks like Freedom offers a similar design (they call it Shaker style) and a similar colour, so it's possible we may be able to get it as part of their sale.

It's a bit more of a risk than white, but I think it'll work here.

Just to make us all shudder collectively (mostly me, though), this is what the kitchen looked like on our first day of owning it: 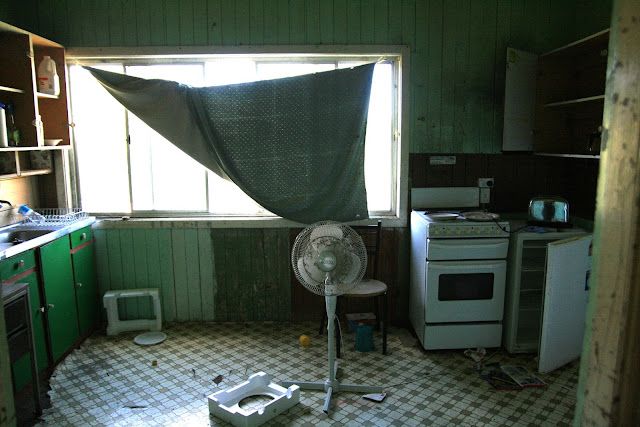 This is what it looks like now. All we've done is strip the lino and cabinets out and paint the wall behind the stove. Much better already, but I still can't wait to get some cabinets back in. What are your thoughts on kitchens - is yours white? Would you pick white in future? Or are you whited out?
Posted by Unknown at 1:48 PM 20 comments:

There's many things I'm enjoying about our new life out here in the country. As I've said before, one of the real highlights has been meeting so many great people living around us.

Yesterday, we joined a bunch of neighbours from our valley for a birthday celebration. After all the rain we've had over the last few days, it was definitely time to get Lu out of the house for a while and we took our time walking over there, stopping to chat to horses and jump in puddles and look at the overflowing creek. Last week, one neighbour took a couple of mornings out to come and help me hack away at weeds in one of our paddocks. She has been fantastically helpful.

It's pretty addictive. I'm wishing this rain would disappear so I could keep pushing forward - there's so much land still to reclaim from weeds and neglect and it's so rewarding when you make progress with it.

Plus, I would never tell my mower this to its face, but I'm kind of missing it.
Posted by Unknown at 4:26 PM 3 comments:

A Mower Snap and a Slithery Visitor

Dan took this photo yesterday and I love it. It sums up perfectly how Lucinda and I spend so much of our time! Some of the comments on yesterday's post re whipper snipping and mowing made me laugh. I absolutely understand the comparisons to the call of the wild. As soon as I see my neighbour heading out on her mower, I feel compelled to do the same. I don't find the noises of those devices too offensive, they just blend into the background or spur me into action. They're also a LOT quieter than dirt bikes.

We had six hours of the bikes yesterday. Because we live in a small valley, it echoes horribly around the area and throughout our house. I'm crossing my fingers for new neighbours sooner rather than later.

In other news, we had our first brown snake up near the house yesterday. It made a speedy get-away once it saw Dan and I'm hoping that it stays gotten-away. It looks like it was camping out in a pile of green waste we'd been meaning to move. Eek!
Posted by Unknown at 6:41 PM 8 comments:

Life in the Lockyer

It's an overcast Sunday here in the Lockyer. It's really the perfect day for quiet pottering around the place, which is what I feel like doing.

Both households are moving on soon - one has their place on the market, the other is renters who've told us they'll be relocating soon - so I'm trying to be patient and put up with it.

But it's crazily disruptive. Lucinda can't sleep through it and the irregularity of the noise - the revving of the engines shattering a quiet afternoon - is, basically, incredibly aggravating.

Moving on from that, life is ticking along nicely here. I've been using my month of solitude to really get stuck into taming the paddocks and gardens. A new flowerbed around the tipuana tree.

I've spoken to one of the neighbours about buying a couple of sheep off him to keep some of the lawns down. Much though I actually enjoy the mowing (luckily), it's much too big a job without some animal help.

A few times a week we're out there currently, Lu strapped to my body in a harness (wearing all her safety gear of course), to mow and mow and mow. Then, there's whipper snipping and trying to get weeds under control too.

We've now got cattle on the back half of the property, but we still need help to keep the rest under control.

Can you tell the houses haven't featured too highly on our priority list recently? Lucinda's been having a great time out here. She is thick as thieves with our neighbour's son, and they play together most days now. Another neighbour also comes over and collects her to take her for a ride around the arena some afternoons... Lucinda takes her own horses along too, of course. Just a quick note to say I haven't forgotten about this blog. For reasons I won't go into, I am temporarily without transport which has made it hard to get to Hungry Jacks for my Internet fix.

HOWEVER - drumroll - our satellite dish is booked to be installed on 28 February so I will have the Internet again oh so soon, and my car back shortly thereafter (thank goodness).

Plenty of projects are ticking quietly along. Last weekend, we found an old claw foot tub in the garden being used as a planter. A quick clean out revealed it's in pretty sound condition. We're hoping to get it re-enamelled and fitted with new feet for the main bathroom.

It's very exciting, looking at ways we can recycle and re-use what's already on the property. Those bits of buried treasure just about makes the three skip bins and countless tip trips to remove the previous owners rubbish worth it! 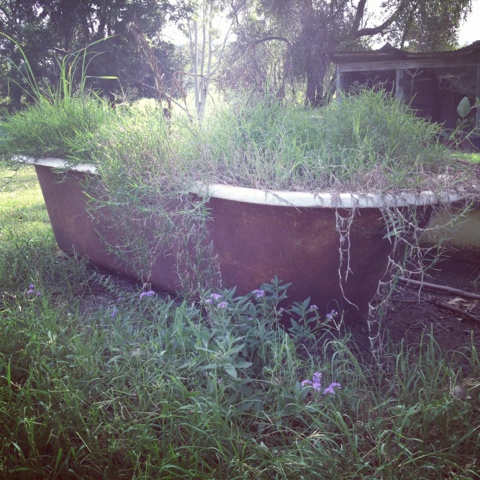 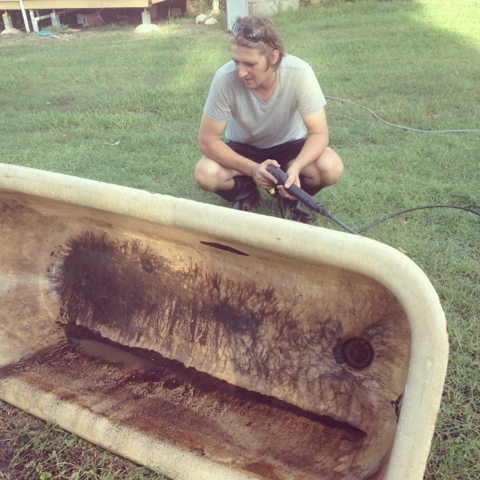 I am drowning in floor plans.

Floor plans drawn on pads, piles of scrap paper, the backs of envelopes and serviettes.

We must have redrawn every possible configuration of this house multiple times and the evidence is all over the house.

It's a necessary process, to work out the best way to get the most out of our home's unusual layout (which is displayed under the tabs at the top of the page).

The big focus at the moment is on how to lay out the kitchen. We're considering opening the two walls that separate the existing kitchen from the pantry and the former post office room, which we'll use as a study. That would effectively give us a large open plan kitchen/study.

Having the kitchen and study open and joined is unusual but makes sense to us. We've always kept our main computer near the kitchen to access recipes or flit back and forward between bill-paying and checking on whatever's on the stove.

Lucinda will eventually be able to be there on the computer while I am nearby too, which seems practical.

I'm interested in hearing from people about their kitchen ideas. What are you happy you included in your kitchen? What would you do differently if you could? If money was no object?

And here are some piccies of life lately, just because. As you can see, we finally got Lucinda on a horse. 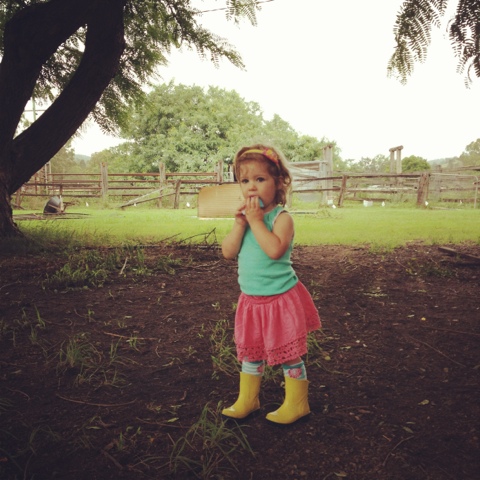 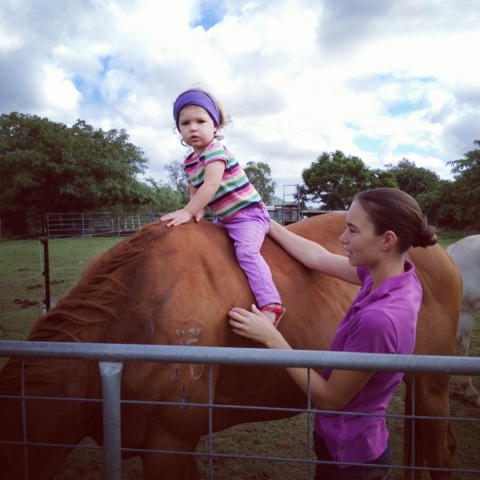 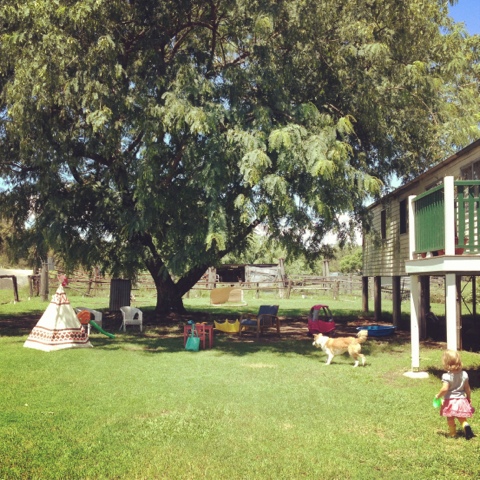 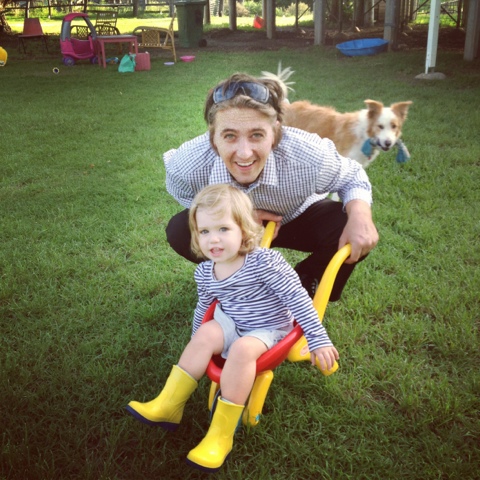